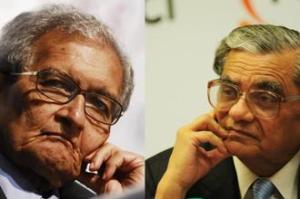 The Sen-Bhagwati altercation may have snowballed into a political issue, but is actually a classic quandary that has long faced India’s politicians and deserves to be out there in the public domain.

First, a little background information on Sen and Bhagwati: both of them are neo-classical economists who prescribe liberalization, labour reform and cutting down on fertilizer and fuel subsidies. It would be wrong to pigeonhole their discord into convenient categories like Gandhi vs Modi or Socialist vs Capitalist, as is being painted by the media.

The fundamental disagreement between Sen and Bhagwati lies in what Bhagwati describes as the ‘sequencing problem’. In a country like India with its gaping class divide, should the state tackle issues like inequality and malnutrition through entitlement schemes first or should it stimulate GDP growth and let trickle-down economics take its course towards addressing inequality? In other words, should the state invest first in human capital or physical capital?

Sen has advocated entitlement-led redistribution schemes such as the Food Security Bill and MNREGA with a view to create a healthy, educated workforce, the lack of which he says will eventually impede growth.

Critics of this policy state inefficient state machinery with rampant corruption as a major deterrent to implementing large-scale social welfare programmes. Also, the massive cost to the state exchequer makes these schemes unsustainable in the long-run and that extensive borrowing by the state to meet these costs will fuel inflation.

Bhagwati believes that investment in physical capital and job creation will generate revenues to make state expenditure on social programmes feasible and also raise income levels for the workforce to invest in their own health and education.

Critics of Bhagwati say that singular focus on growth is not inclusive unless it is supplemented by social welfare programmes and that a malnourished and uneducated workforce would be unemployable.

Both Sen and Bhagwati are right in their own positions. It is just a question of which path will be faster in taking India down the First World super-highway. While a look at India’s deplorable Human Development Index (HDI) statistics would make one immediately side with Sen, a hard-nosed look at the costs of the subsidy programme makes one realize that the state cannot be doling out free food, most of which doesn’t reach the targeted populace anyway. The state needs to strike a balance, do the math and look beyond short-term political gains when passing ambitious legislations.