We were standing amidst the sounds and sights of the sea: the wind was in our hair, the waves boomed distantly, and the birds chirped incessantly. In front of us loomed the Shore Temple, a somber grey structure that immediately transported us to a different era in South Indian history. Behind the temple, the Bay of Bengal stretched in front of our eyes like a vast piece of blue green velvet draped across the horizon, dancing to the wind. Like all ancient monuments, but even more so because of the violent sea, the temple retained in its ruinous beauty, a sense of decaying grandeur, as if time, like termites, was eating away at its existential foundations. It had lost the original intent behind its construction and become that ubiquitous national commodity, a heritage site.

“The 1300-year old Shore Temple is a UNESCO World Heritage Site and has a glorious history”, said my companion, local tourist guide P.Natarajan. The antiquity of this temple can be judged by the fact that to a European sailor floundering in the choppy waters of the Bay of Bengal in the 9th century AD, the shimmering vision of the Seven Pagodas of Mammalapuram – of which one, The Shore Temple, survives today – would have been a reassuring sight indeed. For this sight has been familiar to Western seafarers for centuries – who mistook the principal vimanas for Buddhist pagodas – as an Oriental navigational landmark that assured a profitable trade in cinnamon, ginger, cardamom and other spices. Though the exact reason for the submergence and eventual disappearance of the temples is still shrouded in mystery, archaeologists consider a 13th century tsunami that lashed India’s eastern coast to be partly responsible. Tamil texts written in the 8th century AD by Thirumangai Alvar describe the Pallava port town of Mammalapuram in glowing terms as Sea Mountain “where the ships rode at anchor bent to point of breaking laden as they were with wealth, big trunked elephants and gems of nine varieties in heaps”.

As this reporter de-boarded the bus, it was clear that things were different now. The ancient port of Mammalapuram is now Mahabalipuram, a quaint tourist town by the sea. The only ships departing from the shore are fishermen boats. A mere 5 kms away lies the nuclear reactor of Kalpakkam. The grey silhouettes of the giant reactor make for an alien image in this temple town. Only the central stepped village tank located outside the Shore Temple complex – abandoned and covered by a film of dense algae – conjures images of Mammalapuram of yore when temple chants must have reverberated through the halls of the Pallava kings and townspeople must have congregated around the tank to exchange pleasantries.

The sole seaside witness to this magnificent past, the majestic Shore Temple is composed of three temples, two large and one small, constructed by Narsimhavarman II of the Pallava dynasty, who ruled from Kanchipuram sixty kilometers away in the 8th century AD. It is a five-storied structural temple – and one of the earliest structural temples built in South India – which means that the temple is composed of several sculpted granite blocks stacked on top of each other. This is in contrast to the tradition of rock-cut temples – the art of carving structures out of solid natural rock – that dominated South Indian temple architecture. Natarajan said, “In contrast to its present grey hue, originally, a gleaming white coating of lime, calcium and jaggery was applied on the granite blocks. The white flakes can still be seen in some places but in most places the violent sea and the salt-laden winds have eroded it.”

The temple houses shrines dedicated to Shiva, Vishnu and Brahma indicating the various sects within Hinduism that the rulers had to appease. The shrines are encircled by a perambulation passage (pradakshinapatha) lined with bass-relief sculptures and rock-cut idols of Durga and Ganesha. The sanctum sanctorum facing the east has Shiva represented as Somaskanda – idols of Shiva, Parvati, infant Kartikeya resting on the lap of Parvati and a smaller idol of Vishnu in the background. The entrance to the shrine has two idols of Ganesha  – the younger son of Shiva – and the customary figures of the doorkeepers or dwarapalas. The shrine dedicated to Vishnu has him in the Seshasayi position – reclining on his serpent Seshanag with the elbow supporting the head. Encircling the temple are monolithic Nandi figures – flattened, blurry figurines that still retain a vague resemblance to bull-like figures – originally numbering three-hundred but now reduced to sixty due to continual battering by the sea. Another shrine contains a massive 4.5 ft tall lingam made of polished black granite that the Pallavas imported from neighbouring Andhra Pradesh. Natarajan told this reporter, “This was originally 9 ft. tall but was vandalized by successive generations of Muslim rulers to its present size.”

The 2004 tsunami that struck the Tamil Nadu coast is a traumatic memory for everybody in Mammalapuram. “The water came in right until the market area. All shops were destroyed. Five people were killed. Eventually the government had to construct a new market to rehabilitate the displaced shopkeepers”, said flower-vendor Subhashini whose family has stayed in Mammalapuram for generations. 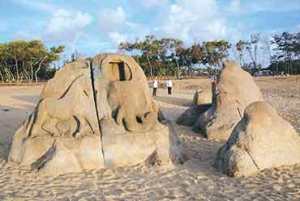 However, the tsunami also dug out some secrets about the Shore Temple right from under the sea. For a few moments before the massive wave struck and the water receded, the tops of the temples buried inside the sea emerged. Also, a statue of varaha Vishnu was found beside the temple after the tsunami. “The tsunami also led to the discovery of an underground tunnel from Mammalapuram to Kanchipuram, the Pallava capital fifty five kilometers away”, said Natarajan. Another offering by the volatile sea was a bass-relief Vishnu idol, dubbed ‘tsunami temple’ by the locals, that now sits pretty on the beach adjoining the Shore Temple complex after spending centuries underwater. These discoveries led to a fresh ‘wave’ of archaeological speculation and boosted the intensity of excavation efforts in Mammalapuram.

There have been some efforts by the Archaeological Survey of India (ASI) to conserve this precariously located heritage monument. In the 1970s when the ASI first took charge of the Shore Temple, the continual beating of the waves and the salt-laden winds had led to the temple being virtually saturated with sea-salts. The granite blocks were being powdered by the impact of the waves and there was no end to this perennial degradation. Natarajan told this reporter, “In 1982, Indira Gandhi led government ordered ASI to install the protective rock structure around the temple to prevent degradation by the sea.” ASI installed a groyne-wall made up of huge blocks of stone surrounding the temple. It also grew casuarinas trees on the fault lines of the groyne-wall to break the wind speed. After these efforts, the waves of the sea do not wash the base of the temple anymore. It also undertakes periodical paper-pulp treatment for the removal of soluble salts in the temple rock.

The Pallava rulers of Mammalapuram undoubtedly meant the Shore Temple to be an audacious challenge to the authority of the Gods and as a barometer to measure the immortality of their feats. It remains to be seen how long the Gods choose to be kind in return.

9 thoughts on “The Shore Temple – A Faded Memory in Stone”