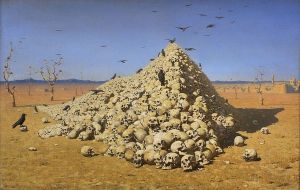 Apotheosis of War: Dedicated to all conquerors, past, present and yet to come..

The nineteenth century was an age of flux and contradictions: while society was in the throes of a nascent technological revolution, colonial powers like the British and the Russians were embarking on virtually medieval – in their dependence on conventional warfare – tours of conquest enabled by modern artillery, firepower and the railroad – a truly awesome expansionary device that was the prime mover of troops and goods then. At the same time, liberalism had struck deep roots within much of European and American society in the aftermath of the French and American revolutions which had marked the symbolic death of absolutism. Slavery, considered a vile form of bondage that subverts the purported principles of liberty and equality, was banned starting in the early 1800s with the Russian Tsardom being the last major European power to ban serfdom in 1862, under considerable pressure from liberal public opinion.

This pressure was exerted by newspapers, which flourished all over Europe and North America, performing their designated role (more or less) as the fourth estate, as a watchdog on the lookout for governmental excess. However, newspapers then didn’t resemble the tasteful (or not) assembly of colourful images and linear text that we are used to seeing today because of one simple reason: photography was too cumbersome and expensive, requiring mobile darkrooms (used first in the Crimean War in 1856). So the job of war photographers was done by – yes you guessed it right – war artists (painters), yet another noble profession that has been sacrificed at the altar of technology.

The output of many of these adventurous individuals is a visually striking and enlightening representation of the military at its most honourable as well as its barbaric moments. War artists would usually be commissioned by the army to travel with them, which enabled them to travel to far flung places as ‘participant observers’ to a lost age, capable of recording their impressions (military or otherwise) on canvas, documentations which often offer a perspective different from written history of the period. This post is about one such individual: Vasily Vereschagin, a Russian war painter who had the privilege of travelling across British India and painting some striking landscapes and portraits of the subcontinental people,  in addition to his extensive coverage of Tsarist Russia’s military campaigns in the wastelands of Central Asia. He could arguably be called one of the first war reporters because of his brutal honesty: he didn’t hesitate to highlight the Russian army in a bad light and paint about subjects like child slavery with honesty, much to the chagrin of higher powers who destroyed some of his highly controversial paintings. Ironically, or rather fittingly, he met his end aboard a Russian warship while covering the Russo-Japanese war of 1905 near the coast of Manchuria after hitting two mines that brought down the ship and its hands to their watery graves.

Candid war reporting: Russian soldiers taking a dump in the steppes of Turkestan 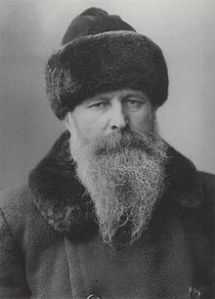 You don’t want to mess with this guy

Vereschagin belonged to a noble line of aristrocratic landowners and was earmarked for military or diplomatic service keeping in line with the customs of the age. He soon enrolled for naval training but developed a passion for art following which he started studying painting in the St.Petersburg Academy of Arts in 1861 full-time. He found the rigid Classical education offered in the academy (copying the works of great painters) tiresome and left for Paris in 1864 to study under John Leon Gerome, a reputed name in the art world.

He soon ventured into the Caucasus region (present-day Georgia, Armenia and Azerbaijan) to discover new subjects to paint, producing sketches that faithfully depicted local attire, customs and traditions. While Vereschagin was a bitter opponent of war and its consequent horrors, he participated in the siege of Samarkand producing an almost photographic reproduction of that pivotal moment in the Russian expansion into Central Asia.

Starting in the mid-1870s, Vereshchagin visited British India which had gone through the Indian Mutiny around twenty years ago in 1857. He travelled all over India from Rajasthan, Gujarat, Delhi, Bombay, Ladakh to the then independent kingdom of Sikkim, producing a series of portraits that are a time-capsule for any Indian seeking to relive the India of the 1800s. He also delves into the matter of British subjugation and oppression of Indian subjects. Throughout the Great Game (roughly the whole of 1800s), the Russian official line maintained that this was happening and this oppression was a pretext used to proclaim that the native population of India was ready for a Russian invasion to ‘free’ them from their subservient condition. That didn’t happen but one can’t help but

Let Them In! : Russian soldiers barging Into Samarkand after an explosive obliterated a crucial part of the defensive wall

wonder what would have been the state of the country (whether there would have been a country?) if the Russians were added to the long list of invaders from the North-West frontier of India to occupy its territory. Maybe India would have been reduced to a satellite state of the Soviet Union, but then your guess is as good as mine. One appalling painting by Vereshchagin shows Indian sepoys tied to cannons to be blasted away as cannon-fodder, as punishment for mutiny. He claimed it was a routine practice in British India.

He has also painted sumptuous landscapes of Indian temples, mosques and minarets. His portraits cut across class distinctions and included Banias, Parsi priests, Bhil tribals, coolies as well as the procession of the Prince of Wales in Jaipur, one of his largest paintings. Here are some of his paintings, you can see for yourself how clear the Yamuna flowed by the Taj and how the mausoleum gleamed a pure white unencumbered of industrial dust that has since settled on its fabled marble. 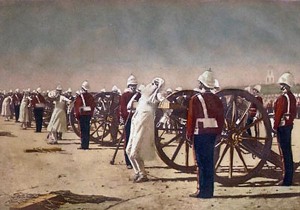 Blowing from guns in British India

A Pavillion on an evening in Udaipur

Blowing from guns in British India

Colonnade of the Jain Temple on Mount Abu

Monastery in a Rock Ladakh

Procession of Prince of Wales in Jaipur

Sale of The Child Slave

Sowar – Messenger of the government

The Gates of the Qutub Minar